Fatima drops the knife
“I am Fatima. Everybody in this village knows who I am. 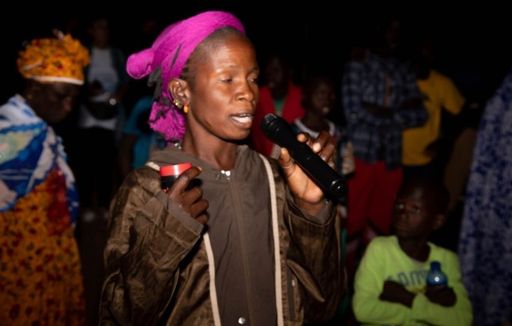 After the screening of ‘Jaha’s Promise’ on Saturday night, a woman stepped out of the crowd.

“I am Fatima. Everybody in this village knows who I am.

My grandmother was the village midwife, and she was also the local cutter. Many of you here were cut by her, and many of you arranged for her to cut your baby daughters.

When I was a teenager, she taught me how to perform FGM. When my grandmother died, I became the village midwife and cutter. But now I understand that FGM is harmful. It doesn’t help girls to grow up healthy and strong. Our religion does not require it.

So I have decided that I will never cut a girl.”

Fatima declaring that she now refuses to carry out FGM.

We are delighted at Fatima’s commitment. We will continue to work with all of our strength and energy, until there is nobody in The Gambia who is willing to carry out or arrange for FGM.

In The Gambia, FGM is traditionally performed by one or two women who also act as the village’s (untrained) midwives and general healthcare people. Knowledge, skills and tools are passed down from generation to generation. It’s a position of considerable status in the community, and the cutter is one of the few women who is highly respected by village elders.

Some cutters make money from carrying out FGM, but very little. They do it because it gives them status and respect, and because they genuinely believe that they are doing the right thing for the girl.

No violence is acceptable